The Dawning of a New Dark Age

On good advice from a learned colleague, I have been informed of a book titled "The Dawning of a New Dark Age: A Collection of Essays on Islam" which looks like a must read for all infidels out there, informed, uninformed, or those who think they are informed of the threat posed by Islam. The following is an extract from the Foreword editorial review: 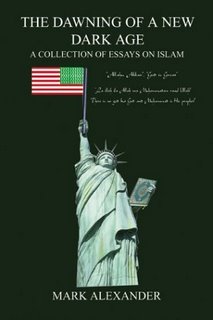 For most Westerners Islam is thought to be just another world religion, equal to Christianity and Judaism. But is this really the case? Upon closer study, Islam seems to be far different from the other two religions. Certainly no one would accuse Muslims of being tolerant, non-judgmental, non-violent or peace-loving! While Muslims have been allowed to build hundreds of mosques in Western countries, Christian churches may only rarely be built, if ever, in Muslim countries! Indeed in some Muslim countries such as the Sudan, it is official government policy to demolish churches! In addition, it is difficult to believe that any world religion would advocate treating women as second-class citizens, and actually get away with it!

The concept of brotherhood in Islam is strong. The posture advocated by Prophet Mohammed in the Koran toward non-Muslims, however, is to seek them out and annihilate them. The phenomenon of suicide bombers is at once both pathetic and chilling. On the one hand, it is pathetic that young Muslims are taught that they can gain entrance into paradise by taking people’s lives in such a gruesome manner. Carnal pleasures, of course, await the males upon entrance into heaven! On the other hand, it is chilling to think that there are any people living in the 21st century ready to teach and encourage such savagery. What is the supposed theological justification for holding to such beliefs? Indeed, is there any such thing in Islam as theology in which the tenets of the faith are examined critically? Isn’t it the case, rather, that the teachings of Prophet Mohammed are accepted literally, and without question?

In his book, The Dawning of a New Dark Age, Mark Alexander explores these questions, and often finds disturbing answers. Unlike many authors on the subject, Mark actually lived and worked among Muslims for many years; so he has first-hand knowledge of the religion and culture. While on his tours of duty in the Middle East, Mark immersed himself in Islam and Arabic culture, studying the religion both from Occidental and Oriental perspectives. He familiarized himself not only with the Koran, but also with the beliefs and attitudes of Muslims in the street. This experience has given him unusually clear insights into the aspirations of the Muslim world. Mark’s conclusions will not be comforting to those who would like to believe that the long-term threat to the West is limited to the aspirations of a few fundamentalist terrorists.
Link to the book and reviews

Oh and did I mention that the man behind the book is an Ibloga contributor. So go and buy it, you know it makes sense.
Posted by J at 12:23:00 am

WWIII is inevitable. The sooner it begins the less likely it it to go seriously nuclear and the fewer people will be killed.

The more we delay and appease, the more powerful the threat will grow. (Remember the Anschluss)

Crusade against Satanism now. Delay is fatal. Beware Taqiyya and Hudna. Shun Appeasers, Dhimmis and Quislings, the longer we delay the weaker we become.

Mr. Alexander's book is excellent. I wish that our heads of state would read it!

In both the Jewish and Christian scriptures the God refers to Himself as "I Am" (YHWH). Jesus also does this in reference to Himself. It is a major theme for both faiths that God defines himself as I AM.

Is there any tradition of this in Islam regarding Allah? Did Allah ever refer to himself as "I Am" to Mohammad? I have only read the Quran in translation and have not studied the finer points of Muslim theology.

But now I'm curious. Is this present in Islam, or did Allah skip a beat over in Arabia?

Mustafa writes that WWIII is inevitable. The sooner the better.
We are just missing a little point here: what we call WWIII has started already a few years ago. It's been on subtly in most countries of the world. We just don't want to recognize it. It's called Jihad in arabic! They have been fighting it for years, and we are still wondering when it's going to start!

Thank you so much for this. I'm happy to learn that my book was recommended to you; and I am so happy, too, that you have given it pride of place on this great weblog.

My greatest fear is that we are losing this battle. ...and I don't want to lose it!
Hey..I forgot to tell you: you have an awesome blog!

I have read Mark Alexander's book and it is everything the reviewer says it is -- and more! Let me suggest that each of us buy a copy of the book, read it, and then pass it on to our representative, senator or the President.

Judging by J's review and the replies to it, this book must be a good one.

J I like how you ended your review with "you know it makes sense". Is your real name Derrick Trotter?